Imago Dei: A Symposium on Spirituality and sexuality 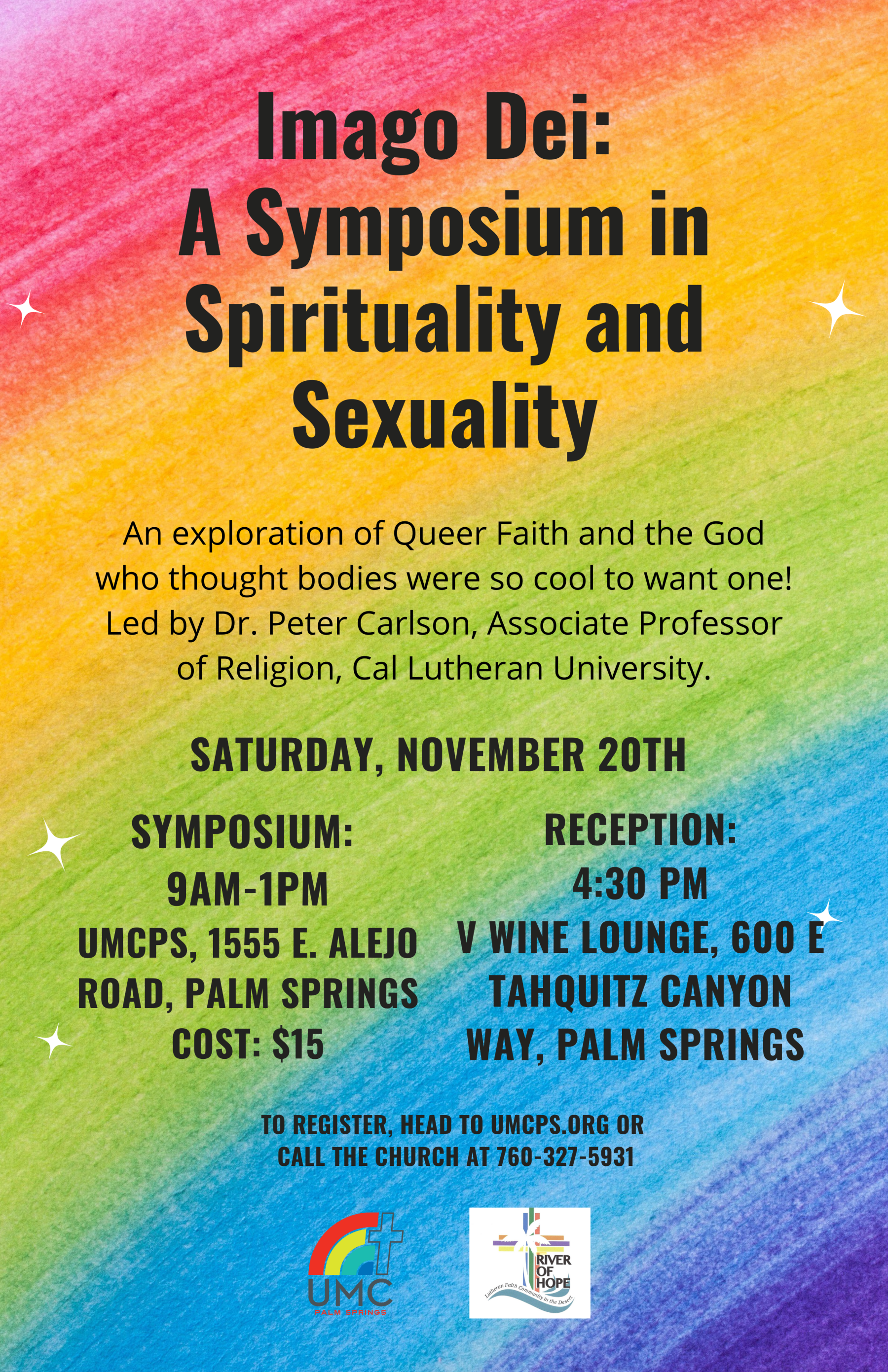 Come and join us on November 20th for an exploration of Queer Faith and the God who thought bodies were so cool to want one! Led by Dr. Peter Carlson, Associate Professor of Religion, Cal Lutheran University. The symposium will be from 9 AM-1 PM at UMCPS. Please bring $15 to pay at the door! There will also be a reception at V Wine Lounge at 4:30 PM.

Be sure to sign up using the form below!

Dr. Carlson’s work at CLU has two primary areas of concentration, which often intertwine: religious history; and gender and religion.

Their research in religious history focuses on the late medieval and early modern eras. They are particularly interested in how various kinds of texts (literary, theological, and academic) influence religious thought and practice. They have studied in particular the library of a late-medieval monastic college in Ashridge, England, attempting to identify its relationship to diocesan structures, the medieval universities, and English royalty during its 250 year history. They are also working on a queer biography of the college's founder, Edmund earl of Cornwall, whose heart was interred at the college with that of another man, Thomas, bishop of Canterbury. Carlson's work studying an all-male, medieval, intellectual enclave relates to their second area of study.

Carlson’s work on gender began with an interest in the constructions of masculinity and femininity (and other gendered expressions) in the late medieval and early modern periods, but has expanded to include theologies of sexuality and gender construction across religious traditions in the present day. They are particularly interested in incarnational theology -- what they call in-bodied theology – and seeks to interrogate the performative roles of gender in all of their classes. They teach courses in Gender and Religion and Queer Theology, and Carlson is Director of the Gender and Women’s Studies minor, working closely with a broad range of academic disciplines to expand the course offerings for the program.

Carlson is a sketchy Christian (because Jesus says some hard stuff), but a committed Episcopalian, and gives presentations at a religious communities across Southern California on the history of the Christian church, the pursuit and quality of sacred space, medieval history, sex and sexuality, and the history of gender and marriage. Carlson also regularly preaches and leads worship services at churches across the state. Carlson is also cis-male, and a proud gender-fucker, messing deeply with people’s minds regarding gender presentation and socializations of gender identity.

Dr. Carlson lives with their spouse, Eric Kamm, his mother-in-law Ina Wentzel, and their cats, Skittles and Merlin, in Camarillo.

Register for this event

Your registration has been received.

Your email has been sent.

We have just sent an email containing a new password to login. You can always change this password by logging in and visiting the settings page.

Your request for an account has been received. Once this information is moderated you will receive an email with your account details.

We are excited you've joined the ChurchSpring family! It is our desire to come along side your ministry as you seek to reach the world for Christ. We would like to take you through a quick tutorial to get you on your way. Click continue to get started.

You have reached the limit of 6 main level navigation items. You can always rename or delete your existing main nav items to better organize your content. Consider adding pages to the sub navigation menus as well.

Are you sure you want to delete this item?

We are processing your request. Please do not click anything until this process is completed.
Thank you.

Where would you like this button to link to?

Your gift has been received. You will receive a confirmation email with the details of your gift shortly.